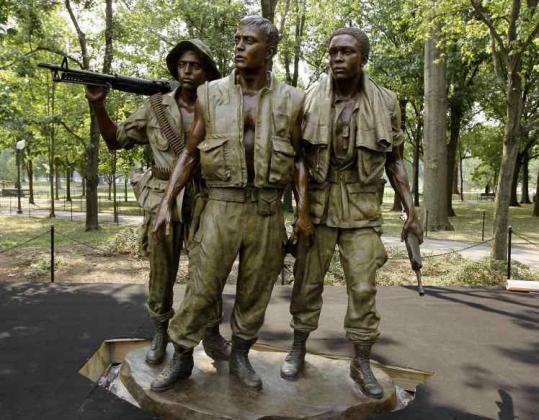 The bronze statue at the Vietnam Veterans Memorial in Washington had turned greenish-blue over the years. (Alex Brandon/Associated Press)

WASHINGTON — A statue of three soldiers installed at the Vietnam Veterans Memorial after critics thought the V-shaped memorial wall was too abstract has been restored to its original finish in a six-week project completed yesterday.  A private foundation that built the memorial raised about $125,000 to restore the bronze “Three Servicemen’’ statue for the first time. After 25 years, weather and the hands of millions of visitors wore down the statue’s patina finish, turning much of it a greenish-blue color.

The statue was completed in 1984.   It faces more than 58,000 names etched in the wall representing those who died.

Retired Army Brigadier General George Price, who served in Korea and Vietnam, said the memorial keeps alive memories of one of the United States’ greatest challenges.

“We are a nation that loves heroes and hates wars,’’ he said. “When you look at this monument . . . recognize the era it represents and understand it could have gone either way.’’