04 Mar Statue of Rosa Parks Is Unveiled at the Capitol 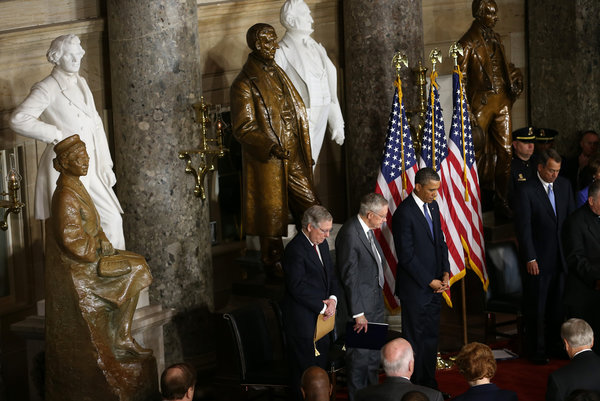 WASHINGTON — More than half a century after Rosa Parks helped kindle the civil rights movement by refusing to give up her seat on a segregated bus in Alabama, she has become the first black woman to be honored with a life-size statue in the Capitol.

The statue of Mrs. Parks captures her waiting to be arrested on Dec. 1, 1955, after she refused to give up her seat for a white passenger on a crowded segregated bus in Montgomery, Ala.

At a dedication ceremony on Wednesday that was attended by dozens of Mrs. Parks’s relatives, President Obama and Congressional leaders paid tribute to Mrs. Parks, whose act of defiance and work in the civil rights movement helped spur desegregation across the country and the passage of the Voting Rights Act. Almost simultaneously with the ceremony, the landmark law was facing a legal challenge at the Supreme Court, across the street from the Capitol.

“This morning, we celebrate a seamstress, slight of stature but mighty in courage,” Mr. Obama said.

The statue of Mrs. Parks captures her waiting to be arrested on Dec. 1, 1955, after she refused to give up her seat for a white passenger on a crowded segregated bus in Montgomery, Ala. She is seated, dressed in a heavy wool coat and clutching her purse as she looks out of an unseen window waiting for the police.

“In a single moment, with the simplest of gestures, she helped change America and change the world,” Mr. Obama said.

He chronicled how Mrs. Parks, despite having held no elected office, lacking wealth and living far from the seat of power, touched off a movement that made it possible for him to become president.

“And today, she takes her rightful place among those who shaped this nation’s course,” Mr. Obama said.

“We do well by placing a statue of her here,” he added. “But we can do no greater honor than to remember and to carry forward the power of her principle and a courage born of conviction.”

The statue of Mrs. Parks will sit in Statuary Hall, where lawmakers frequently pass on their way to vote, and where, Speaker John A. Boehner noted, she sits in the gaze of Jefferson Davis, the Mississippi senator who was appointed president of the Confederacy during the Civil War.

Senator Mitch McConnell of Kentucky, the Republican leader, said that Mrs. Parks’s decision to get arrested rather than to give up her seat helped unite the country.

“For some, Rosa Parks served as an inspiration to stand up against injustice,” he said. “For others, she was a spur to reflection and self-examination, and the reconciliation of cherished ideals of freedom, democracy and constitutional rights with the reality of life as others lived it.”

Urana McCauley, Mrs. Parks’s niece, sat crying through the hourlong program. At 42, she is the same age that her aunt was when she was arrested.

“We talked about what it was like and how important it was for her to do what she did,” she said. “It’s so personal because I know what my aunt went through. And it was beyond just being physically tired. She was tired of the injustice.”

At the Supreme Court, a crowd protested as the justices began hearing opening arguments in a challenge to the Voting Rights Act.

Representative James E. Clyburn of South Carolina, a member of the House Democratic leadership, said many people feared that the case could undo many of the advances Mrs. Parks fought to secure.

“The pursuit is not over,” he said. “To honor Rosa Parks in the fullest manner, each of us must do our part to preserve what has been gained, to defend the great documents upon which those gains were obtained, and continue our pursuit of a more perfect union.”

Mrs. Parks, who would have turned 100 on Feb. 4, has received the highest civilian honors from the White House and Congress, and her face has been on a postage stamp. When she died in 2005, she was the first woman to lie in state in the Capitol Rotunda, an honor usually reserved for former lawmakers and presidents. She also served as a Congressional aide on the staff of Representative John Conyers, Democrat of Michigan.

Her statue adds to a small collection of art devoted to prominent black women in the Capitol that includes a bust of Sojourner Truth and a painting of Shirley Chisholm.

The statue was the first commissioned by Congress in 140 years. It was designed by Robert Firmin and sculptured by Eugene Daub.

The Rev. Jesse L. Jackson attended the dedication ceremony. His son Jesse L. Jackson Jr., a former congressman, introduced the legislation to commission the statue of Mrs. Parks with former Senator John Kerry, now the secretary of state. After the ceremony, the elder Mr. Jackson remembered Mrs. Parks as a fighter.

“She was not a meek woman,” Mr. Jackson said, rejecting the popular narrative that Mrs. Parks did not give up her seat simply because she was tired, and recalling her work for the National Association for the Advancement of Colored People. “She meant to make something happen.”

He predicted that the Supreme Court would leave intact the Voting Rights Act, which Mrs. Parks watched President Lyndon B. Johnson sign in 1965.