Posted at 17:55h in News, Uncategorized by Matt 0 Comments
Share 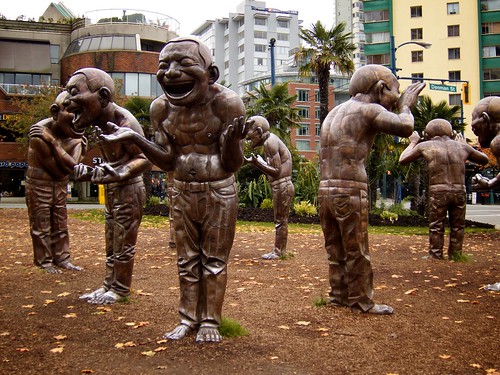 You may not know this sculpture by name, but chances are you’ve seen it.  A-maze-ing Laughter consists of 14 enormous bronze statues – in all different poses – of a shirtless guy laughing hysterically.

First installed in 2009 as part of the Vancouver Biennale, A-maze-ing Laughter has quickly become the city’s most recognizable piece of outdoor art.  Kids climb all over the giant, three-metre-tall statues and swing from the arms.  Tourists stream in to mimic the funny poses and take snapshots.  One couple was even married right in the middle of it all.

But great art, of course, doesn’t come cheap.  The sculpture, by Chinese artist Yue Minjun, was originally priced at a whopping $5 million.  Yue later slashed that to a relatively modest $1.5 million, which the Biennale Foundation is now trying to raise (The Biennale is a non-profit group that brings world-class sculpture to Vancouver every two years). 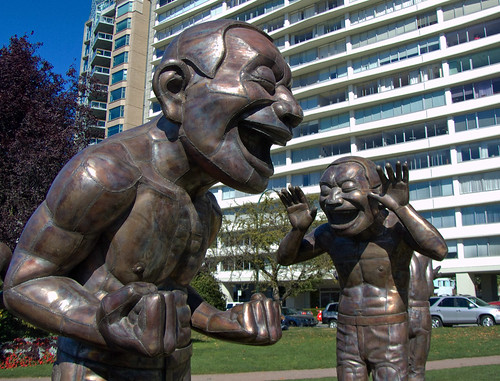 Meanwhile, the Vancouver park board has officially agreed to let the sculpture stay in its current location, in tiny Morton Park, right next to English Bay.  The park board has also said it will work with community groups to raise the funds needed to buy A-maze-ing Laughter.

Hooray for more art.  But what’s the deal with all those laughing faces, anyway?  It turns out the faces are all modeled after the artist himself.  In fact, Beijing-based Yue Minjun has made an entire career out of paintings, sculptures, watercolors and prints depicting his own face in a state of hysterical laughter.

I’m not quite sure what the symbolism or hidden meaning behind Yue’s faces is.  But one thing’s clear:  Lately he’s been laughing all the way to the bank.  His painting Execution(which definitely has some political overtones) recently sold for $5.9 million at Sotheby’s London, the most ever paid for a piece of contemporary Chinese art.

What do you think of A-maze-ing Laughter?  Is it worth the price tag?