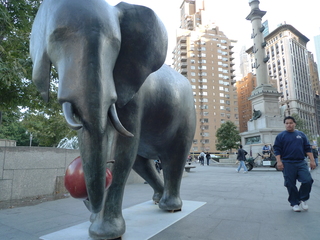 UPPER WEST SIDE — Two elephants and a pair of sheep have taken up residence on Broadway, but there’s no need to call animal control officers.

The animals are bronze sculptures that will be on display through April 2012. They’re part of a public art exhibit hosted by the Broadway Mall Association, the non-profit that beautifies and maintains the landscaped medians in the middle of one of the city’s busiest thoroughfares.

The exhibit stretches across more than five miles, through the Upper West Side, Morningside Heights, West Harlem and Washington Heights.

The Broadway Mall Association, which has an annual budget of $500,000, started decorating the malls with temporary art in 2004, with an exhibit by artist Tom Otterness.

“It was so well-received, and the public just enjoyed it tremendously,” said Deborah Foord, a BMA board member and chair of its public art committee. “From that point on we made a conscious effort to seek out art that would be appropriate to be on the malls.”

This time around, the exhibit showcases the work of American artist Peter Woytuk, 53. A BMA board member spotted Woytuk’s work at the Morrison Gallery in Kent, Conn. The gallery paid for its installation on Broadway.

The sculptures, which were installed on malls from Columbus Circle to Mitchel Square on West 168th Street, include four ostriches on West 86th and 87th streets, a bear balancing atop a giant apple at West 67th Street, and a pair of jumbo-sized ravens roosting on a bench at West 79th Street.

The work was already turning heads on Monday, with commuters pausing to snap photos of a 12-foot cerulean blue kiwi bird at the West 72nd Street subway station.

At West 79th Street, four-year-old Nile Temesgen made a beeline for a sculpture of a raven atop a stack of giant apples.

“It’s really nice for the neighborhood,” said Nile’s mom, Hagere. “Usually you see (art) downtown. I like it.”

But Sara Kusnetzky, a Harlem resident, deemed the sculpture of a bear perched on a giant apple at West 67th Street “boring.”

“It’s cute, it’s fairy tale, it’s whimsical,” Kusnetzky said. “I think it’s lovely to have something here, but for a piece of art in the middle of the street, something more daring would be more interesting.”