29 Apr Once Upon a Landscape 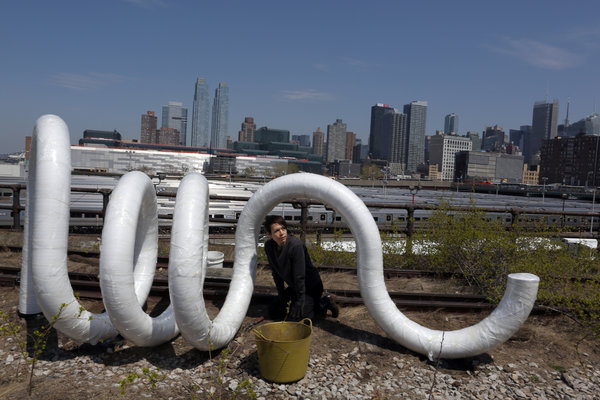 When the artist Carol Bove was a girl, growing up in Berkeley, Calif., she once helped a friend of her father’s build a fish-shaped junk sculpture on the mud flats of nearby Emeryville, in a kind of guerrilla art park that free-spirited sculptors kept alive and weird for decades beginning in the 1960s.

A 1982 article in The New York Times gave a snapshot of the pieces rising from the flats at the time: “a 25-foot wheelchair, erected by a group of handicapped sculptors; a quarterback preparing to throw a pass; a Jesus on a cross; a sailing ship; a dragon; a cake announcing ‘Steve Loves Susan’; a notice for a tall people’s convention; and a sign that says ‘Make Art, Not Ads.’ ”

“It was a Surrealist tableau of a pretty weird kind,” Ms. Bove, 42, recalled the other day in her Brooklyn studio. “Coming to that as a kid opened a huge channel for me about what art in public could be.”

If there is any scrap of Manhattan real estate left that could be said to feel as wild as the mud flats of an industrialized bay, it is the final undeveloped section of the High Line, from West 30th Street to West 34th Street, which looks like the rest of the elevated park did during decades of dereliction: beer cans, old birds’ nests, scraps of rusted pipe, splintered railroad ties and wild crab-apple trees sprouting from the track ballast.

Beginning in early May Ms. Bove will seed six of her own creations among this chance accumulation of urban fragments and flora, entering into one of her first experiments in public art. But the pieces will sit in a kind of limbo between public and private space: anyone wanting to visit will need to buy a $6 ticket online (thehighline.org) from the High Line, which will begin on Wednesday to schedule small-group tours of the sculptures over the next year, allowing access past the fence that now seals off the section.

Ms. Bove (pronounced bo-VAY) has become a highly sought-after artist during the last decade for work that sits at an unusual intersection of sculpture, Conceptual assemblage and design, evoking both a real cultural era — the 1960s and ’70s, as bohemian idealism was unraveling — and a kind of never-never land of Modernist fulfillment. A piece might simply be a spare arrangement of paperback books and magazines on minimalist wall shelves, accented with a peacock feather or a seashell sculpture, like something from an elegant Jungian therapist’s office.

Ms. Bove, who is to have a solo exhibition of new sculpture at the Museum of Modern Art in July, said that when Cecilia Alemani, the High Line’s curator and director of art, approached her a couple of years ago about outdoor work, she found the idea of making what too often earns the epithet “plop art” almost comical.

“I think of public art as sort of fraudulent — something supposedly for everyone that uses a really elitist language that makes it seem as if it’s only for people already familiar with that language,” she said. “You never look right at them. You’re going to work and you pass them, and they repeatedly punctuate your consciousness. It’s like you have a relationship with them that you’re not even aware of.”

But then, she added, the preposterousness of the idea came to seem like a dare. “How do you get past it?” she asked rhetorically, smiling. “You just do it. You lean into it.” She made large-scale pieces for the Venice Biennale in 2011 and several outdoor pieces for Documenta 13, the art exhibition in Kassel, Germany, last year. But the High Line offered a rare opportunity to situate art where it was never meant to be seen, on near-wild land whose existence so close to Midtown made it seem almost like a Surrealist sculpture itself.

The section, which extends several hundred yards around the West Side rail yards, will not be completely renovated into parkland like the rest of the High Line but will be opened to the public in 2014 with only a walkway erected along its length to allow people to see what the line looks like in its feral state. “This will be really the last chance to see this part of the line this way before it changes for good,” said Ms. Alemani, who became interested in Ms. Bove for a project because “the landscape already has all these sculptural elements, stacks of iron beams, rolls of chain-link fence, that kept making me think in really unexpected ways about Carol’s work.”

Ms. Bove’s best-known pieces seem delicate enough to balance on a pin, but she has long been interested in the category of materials that Robert Rauschenberg, art’s great scavenger, called “what was available” — junk, primarily urban. During a reporter’s recent visit to her studio, near the Red Hook waterfront, the eroded springs of an old mattress that she had “harvested” from the street sat on the floor for her contemplation.

Later, on a visit to the High Line, she showed a reporter a mound of trash that she described admiringly as looking as if “it had developed its own ecosystem.” A few of her six pieces on the rail line, which were installed last week, toy with the idea that they might have grown there — a minimalist geometric work, for example, using only welded-together I-beams, straddling the old rails. But other pieces, like two blindingly white tubular curlicues that she calls glyphs, look like things that wandered in from a Kubrick movie, utopian and sinister in equal measure. These works also play around, partly reverently and partly satirically, with some of the most admired plop art of the 20th century, by artists like Alexander Calder, Alexander Liberman and Tony Smith.

The contours of the real world, however, keep crowding in. As she walked the High Line last week during the installation of her works, she stopped to look long and hard at a beautifully rusted roll of chain-link fence slumped on the side of the rail line that would eventually need to be cleared for the walkway.

Ms. Alemani seemed to intuit her designs. “If you want it,” she said, “it’s totally yours.”