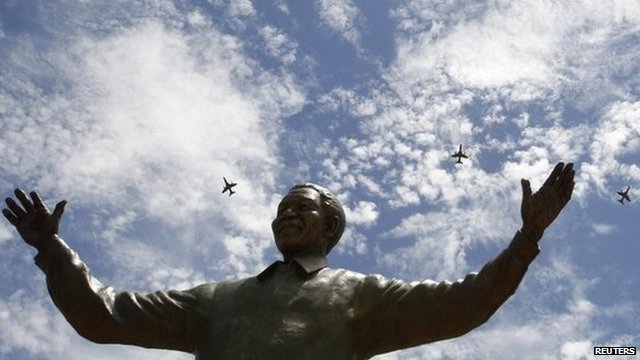 President Zuma was at the unveiling of a new statue of Nelson Mandela.

A statue of Nelson Mandela, South Africa’s first black president, has been unveiled in the capital, Pretoria, a day after he was buried.

The nine-metre (30ft) bronze statue has been erected at the Union Buildings, the government headquarters.

The statue, with Mr Mandela’s hands reaching outward, was intended to show that he had embraced the whole nation, President Jacob Zuma said.

Mr Mandela was given a state funeral at his ancestral home on Sunday.

African National Congress (ANC) members, veterans of the fight against apartheid and foreign dignitaries – including several African presidents and the Prince of Wales – attended the funeral ceremony in the village of Qunu in South Africa’s Eastern Cape province.

It followed a 10-day period of mourning and celebrating Mr Mandela’s life after his death at the age of 95.

The national flag was raised on Monday from its half-mast position, and was flying as normal.

The statue was unveiled on South Africa’s Day of Reconciliation, a public holiday which marks the end of racial conflict in South Africa.

“Former President Mandela is associated with the promotion of reconciliation which is why the day was chosen for the unveiling,” said the government.

During white minority rule, 16 December was called the Day of Covenant to honour the victory of Afrikaners over a Zulu army in an 1838 clash known as the Battle of Blood River.

It led to his arrest and imprisonment for 27 years.

After he became president in 1994 at the end of minority rule, he used the day to urge South Africans to set aside their differences and to unite.

During his address at the funeral on Sunday, Mr Zuma pledged to build on Mr Mandela’s legacy.

“As your journey ends today, ours must continue in earnest… South Africa will continue to rise because we dare not fail you,” he said.

Mr Mandela’s body lay in state at the Union Buildings for three days last week, at least 100,000 people filed past his open casket to pay their last respects.