ATLANTA — Rob Warnock lingered last week in the shadow of a striking bronze sculpture just outside Turner Field. He had been assigned to hand out Braves tickets for his company’s employee-recruitment gathering at that night’s game, and, thinking about where to rendezvous, had said to his boss, “Which gate?” 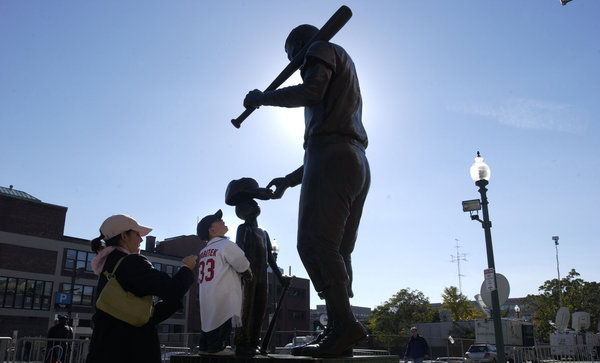 “Why don’t you just meet them at the Hank Aaron statue?” came the reply.

Hours later, as Warnock waited there, small clutches of fans stopped to take cellphone snapshots with the bronzed sultan of swing.

Statues, though hardly a new phenomenon at baseball stadiums, are now popping up all over. Some 70 former players have been immortalized, several this season. The latest: Johnny Bench, whose likeness was unveiled last weekend at Cincinnati’s Great American Ball Park.

Bench said last week that a statue was “far cooler” than any other accolade. He said he was delighted at the depiction of him rising out of a catcher’s crouch and erasing a base-stealer.

What began as a tribute to bygone stars and as a device to dress up the stadium grounds now serves multiple purposes. Statues have become meeting places for fans, and photo opportunities.

“This is their way to get close to these players, to admire excellence,” said Zenos Frudakis of Philadelphia, who created the four Phillies statues and has seen fans with their arms wrapped around the figures.

The sculptors, many of whom grew up cheering for their subjects, say baseball was the sport best suited for statues.

“They add a history point,” said Lou Cella of Chicago, who is responsible for White Sox and Cubs renderings, including the midsummer arrivals Frank Thomas and Ron Santo. “They are ways for people to consistently remember who these guys are. It’s the grandfather telling his grandson, I saw him play.”

Harry Weber, credited with all but one of the 11 player castings in St. Louis, said, “Baseball lends itself to the personality of the individual,” making it easier to differentiate the athletes than in other sports. He has captured the power of a Bob Gibson pitch, the range of a Ozzie Smith catch, the form of a Lou Brock at-bat.

St. Louis, which immodestly bills itself as Baseball City U.S.A., is the big leagues’ most statue-centric town. Hall of Fame induction or a retired jersey number usually warrants a bronzed replica.

“The statue is probably the highest standard for an honor that we have,” said the team’s president, Bill DeWitt III. The Cardinals, he added, are not keeping a running statues score. Still, he acknowledged, the 11 statues are “ a point of pride in terms of the quantity we have.”

Because the voice of a franchise can also become its face, numerous TV-radio announcers are bronzed: Harry Caray in Chicago (Cubs), Ernie Harwell in Detroit, Harry Kalas in Philadelphia and, in Seattle, Dave Niehaus, who died last November and whose statue ceremony took place last week.

“In some subliminal way, the announcer becomes like a family member,” said Larry Nowlan, who sculptured Kalas, a Phillies announcer for 38 years, until his death in 2009. “Players don’t stay around long enough.”

Two players in Atlanta, Aaron and Ty Cobb, have twins elsewhere. Aaron was an established Brave in Milwaukee when they moved away and has a statue there; Cobb, an ex-Tiger celebrated in Detroit, was a native Georgian though never a Brave.

Cool Papa Bell also has two statues, in Pittsburgh and in St. Louis.