A series of cool, if slightly weird, bronze sculptures by Alexander Kosolapov. 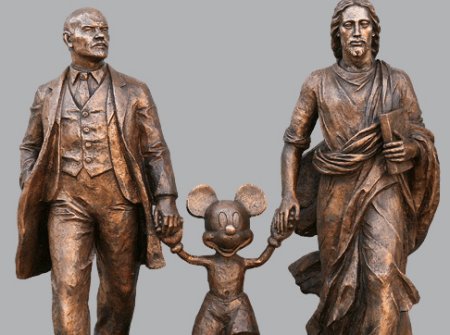 He’s had to explain the art before, so for those of you who just don’t get it, he’ll try to explain it again:

The artist uses the following characteristic of human perception, the omission or even distortion of one of the elements of imagery stereotype, which does not suppress the capability of its automatic recognition. This allows Kosolapov to develop an original type of doubling object, simultaneously referring to two externally similar, but baring no relation to one another whatsoever, stereotypes of American and Russian mass-culture.

For Kosolapov the role of the imported element (of social origin) is in the destruction of that setting in which he is placed (the setting, consisting of adopted cultural stereotypes). Lenin and Mickey Mouse become mutually interchangeable, as products of mass culture. Creating this radical collage, the artist implies that in spite of the conflicting relations between the two systems, the distinguishing characteristics of which are the symbols used by him, they aim to convince the population of the authenticity and sincerity of their products without a doubt match one another.