Public art makes me think of what the Conceptualist Douglas Huebler once said: “The world is full of objects, more or less interesting; I do not wish to add any more.” That may be a funny thing for an artist to say, but if you live in a place as densely packed with objects of all kinds as New York City, you may appreciate its wisdom. Nevertheless, for better or worse, temporary public art displays pop up all over the city during the warm seasons in hopes of adding beauty and zest to the urban fabric.

Julia Gillard for The New York Times
Outdoor Sculpture One of nine installations by Niki de Saint Phalle on traffic islands from 52nd to 60th Streets on Park Avenue features a stout tree whose branches have morphed into gold heads of lively snakes.

A stretch of Park Avenue is one place where the necessity of public art comes into question right now. There a series of monumental, bulbous figures clad in colorful mosaic tiles by Niki de Saint Phalle (1930-2002) punctuates the traffic islands from 52nd to 60th Streets. Dating from 1983 to 2001, they include simplified but recognizable portraits of Miles Davis and Louis Armstrong, as well as a number of renditions of curvy, knob-headed female beauties and a stout tree whose branches have morphed into gold heads of lively snakes.

Back in the ’60s, when Ms. de Saint Phalle was developing her aesthetic, figures like these had a goofy, liberationist vibe. But the works here seem woefully outdated, more tacky than visionary.

As a counterpoint to Ms. de Saint Phalle’s strenuously playful works, a quartet of abstract metal sculptures by John Chamberlain occupies the plaza of the Seagram Building, on Park Avenue between 52nd and 53rd Streets. Made from 2008 to 2010, they are unlike the Abstract Expressionist conglomerations of automobile body parts he was known for. 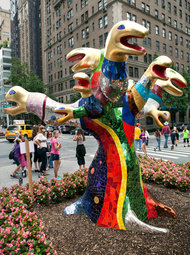 Mainly they consist of tubular elements, made of crushed sheet metal, that resemble elongated elephant legs bound together into knotlike configurations. They were copied from small maquettes that Mr. Chamberlain created by molding aluminum foil with his hands. Colored metallic green, copper and silver, they are weird hybrids of beauty and ugliness. Here on the Seagram Building’s porch, they call to mind the old dismissive label for abstract sculpture on corporate plazas: “plop art.”

As chance would have it, there is a piece of outdoor sculpture in the same neighborhood representing the opposite of the beautifying imperative. Installed on the plaza of Lever House, it is a giant rat, one of those balloons that labor union strikers often bring with them to represent masters of the capitalist universe, but here cast in bronze by the team of young artist-provocateurs known as the Bruce High Quality Foundation. In a poetically just world, it would be permanently installed on Wall Street within waving distance of the raging bull.

The rat, titled “The New Colossus,” accompanies an exhibition of the group’s works in the glassed-in lobby of Lever House. It consists of real objects, like mops in buckets, vacuum cleaners, a step ladder and office furniture, scattered about the space. Each has an audio speaker built into it that is connected by radio to a video montage on a flat screen called “Art History With Labor: 95 Theses.” Different professional actors’ voices enunciating texts about art and labor emanate from the speakers, as if these objects associated with daily work had themselves become animated, like ventriloquists’ dummies, byizing passions.

I wonder what the denizens of this zone of corporate business and super-expensive domiciles think about the Bruces’ agitprop? It is hard to imagine many of them being aroused to revolutionary fervor. Still, the incongruity itself is refreshing. In this respect it is worth noting that the Lever House art program is privately sponsored, with the former Whitney Museum of American Art curator Richard Marshall organizing its exhibitions. It is rare to find such baldly partisan expression as the Bruces’ in outdoor art sponsored by public institutions. Offense is so easily taken, especially if taxpayer money is involved.

A more circumspect approach to political art can be found in two pieces included in “Common Ground,” a 10-artist exhibition in City Hall Park in Lower Manhattan, organized by the Public Art Fund. “It’s Never Too Late to Say Sorry,” by the team Elmgreen & Dragset, consists of a glass case displaying a gleaming aluminum megaphone. The case is locked, but a descriptive label explains that once a day a performer will open it and “activate” the piece. No actor showed up while I was there, but in an online video of the sculpture’s debut in Rotterdam you get to see a man unlock the case, take out the megaphone, hold it to his mouth and cry out, “It is never too late to say, ‘Sorry!’,” whereupon he returns the bullhorn to its case and walks away.

Placed across the park’s circular central plaza is Amalia Pica’s “Now, Speak!,” a podium cast in concrete that seems to invite people to step up and say whatever is on their minds. Otherwise implacably silent, it shares with Elmgreen & Dragset’s piece a funereal feeling. Both could be memorials to the loss of a widely shared and well-developed public discourse.

As Martha Schwendener observed in her review in The New York Times, other works in “Common Ground” exemplify the distinctive language of high-end contemporary art. Paul McCarthy’s colossal inflated ketchup bottle; Christian Jankowski’s plaque announcing the burial of his remains somewhere in the park; Justin Matherly’s rough re-creation of a part of the Ancient Roman sculpture “Laocoön and His Sons,” elevated on a platoon of aluminum walkers: these as well as works by Matthew Day Jackson, Thomas Schütte and Jenny Holzer speak in tongues likely to be as mystifying to the public as they are familiar to people conversant in the polyglot lingo of today’s art world. 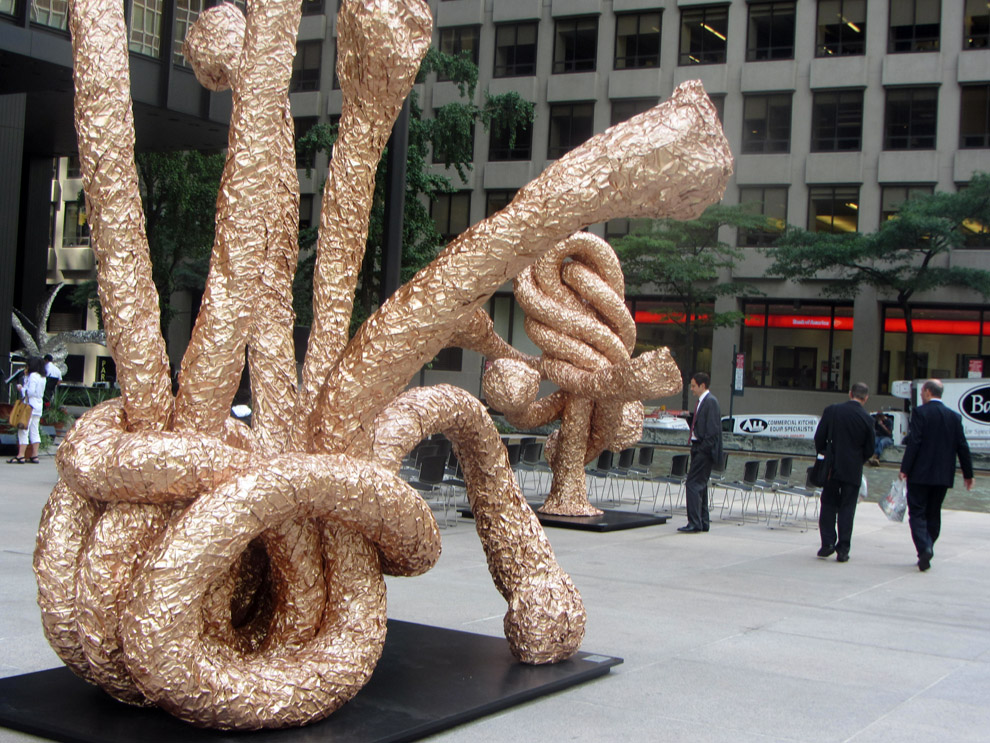