24 Aug Entering the Chattanooga zoo is almost like stepping into the wild. Bronze chimps, including babies seem to move realistically across the grounds. 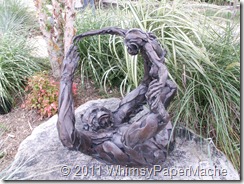 A grant from the Benwood Foundation to the Hunter Museum of American Art, and the public’s vote enabled the placement of sculpture artist Bart Walter’s The Troupe at the new entrance of the Chattanooga, Tennessee zoo. The bronze sculpture consists of eight chimpanzees in six sculptures. The Troupe was one of three proposed sculptures for the zoo, and was selected by a public vote. The zoo is one of three sites in Chattanooga selected for installation of public art by the Hunter Museum. 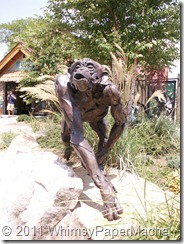 The artist spent six days following chimps in the wild in Uganda in order to bring the chimps to life in bronze. Walter is an accomplished sculptor whose works are displayed in many places, including the Jane Goodall Institute. Walter’s stated goals include stripping the details down to those that express the true essence of both the physical and spiritual being of the animals he depicts. Another group of seven chimps sculpted by Walter, The Gathering, is at the National Zoo in Washington, D.C.