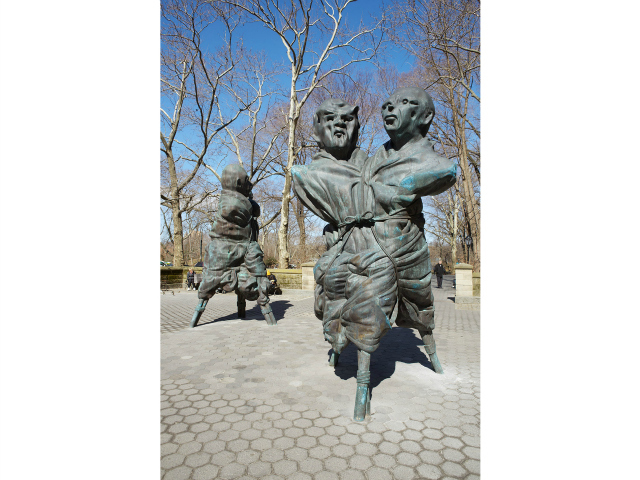 UPPER EAST SIDE — Many years ago, they were mere molded-clay miniatures.

Today, they are cast-bronze titans.

Thomas Schütte’s “United Enemies” — now on display on Fifth Avenue and East 60th Street, in the southeast corner of Central Park — has humble aesthetic origins, according to the Public Art Fund, which featured the installation and others citywide.

Schütte was first inspired to create the series when completing an art residency in Italy, during which several prominent politicians were arrested on corruption charges, according to the fund’s curatorial statements.

Though inspired, in part, by true events, the series does not realistically portray any single person; the sculptures are more like “mythical characters rather than specific individuals.”

Some of these abstract elements are described as “heads emerging from swaddling robes that conceal their limbs.”

And the statues’ emotions also have a figurative feel.

“Faces are aged and anguished, rendered in soft focus to suggest the waning power of would-be patriarchs,” according to the curatorial information.

Though this form of statuary is one of “the most traditional forms of public art,” the foundation has lauded Schütte for giving the medium a new spin by bypassing run-of-the-mill elements like a “classical pedestal.”