On Aug. 6, the Canby Vietnam Era Veterans’ Memorial was dedicated after 11 years of work by Michael and Irene Breshears. 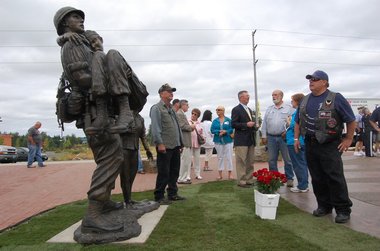 Kristine ThomasCanby resident Bobby Meyer (right) was a friend of Army Spc Warren E. Newton of Canby, who was 18 on Jan. 9, 1968, when he went missing in action. Newton is one of the inspirations for the new statue at the Canby Vietnam Era Veterans’ Memorial sculpture.

The wounded soldier represents Army Spc. Warren E. Newton and the soldier carrying Newton represents Marine Pfc. Gary W. Martini of Portland, who was awarded the Medal of Honor for rescuing two other Marines during a firefight that killed him at age 18 on April 21, 1967.

Standing by the bronze statue at the Vietnam Era Veterans’ Memorial in Canby, resident Bobby Meyer said he’s grateful to the many volunteers who worked on the memorial.

“This memorial means a lot to me because Warren was a friend of mine,” Meyer said. “There were a lot of Vietnam veterans who came home and were not treated well.

“This memorial is a way to honor them.” 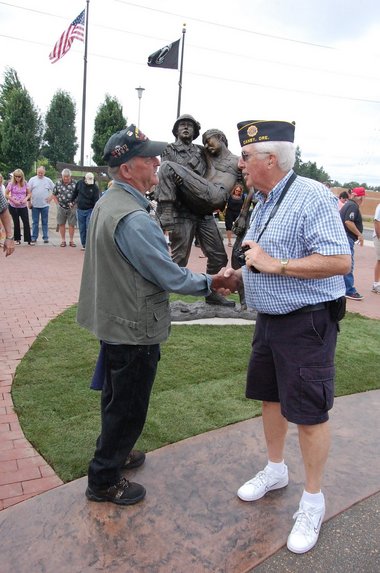 Kristine ThomasCanby residents Bob Ray (left) and Mark O’Shea are two of the many volunteers who worked on the Vietnam Era Veterans’ Memorial.

Bob Ray served in Vietnam from 1966-67 as a U.S. Army Ranger in the 9th Infantry Division and received two Purple Hearts, a Bronze Star and a Combat Infantry Badge.

“Because of the political climate in the United States, Vietnam soldiers weren’t highly respected when we returned home,” Ray said.

“We didn’t get a ticker tape parade. This memorial is recognition for what we did to serve our country.”

Mark O’Shea, a retired Air Force Vietnam Era veteran, wiped away a tear as he said, “The memorial means everything to me.

“I lost friends in this war. This memorial is recognition we never got.” 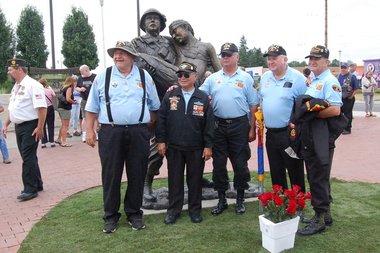