28 Jun 12 Heads Do the Talking for a Silenced Artist 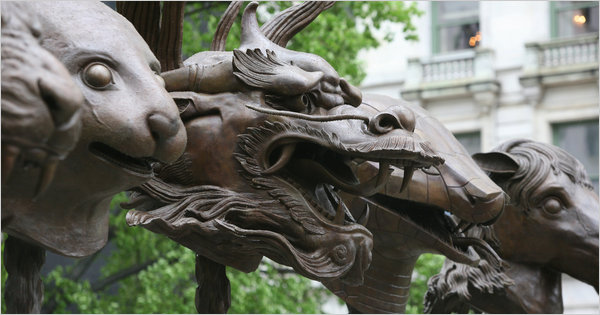 An exhibition of new work opened at the Neugerriemschneider Gallery in Berlin, which displayed an immense white banner printed in black with the words “Where is Ai Weiwei” on the front of its building. (It was designed by the artist Rirkrit Tiravanija.) A larger exhibition will open next week at the Lisson Gallery in London. And in Manhattan “Circle of Animals/Zodiac Heads,” which is being termed Mr. Ai’s first public sculpture, was proclaimed open on Wednesday morning in a drizzle at the Pulitzer Fountain in front of the Plaza Hotel.

The ceremony was overseen by Mayor Michael R. Bloomberg and attended by dozens of members of the press and the New York art world, including 12 artists and arts officials who represented the absent Mr. Ai by reading short pertinent sentences from his interviews and blog posts. Citing New York as a city that “fiercely defends the right of all people to express themselves,” Mr. Bloomberg called Mr. Ai “one of the most talented, respected and masterful artists of our time.” “Circle of Animals” is a series of 12 heads of the creatures of the Chinese Zodiac, for which years are also named: rat, ox, tiger, rabbit, dragon, snake, horse, goat, monkey, rooster, dog, boar. Each head is cast bronze, roughly four feet high and set on a slender six-foot bronze base that suggests an abstracted lotus stem and leaves. Among the most sculpturally distinctive parts of the project, the bases also resemble stakes, which adds a slight touch of gallows humor. (The work will be on view through July 15 and will later travel to Los Angeles, Houston, Pittsburgh and Washington; another edition will go on view next week outside Somerset House in London.)

Contrary to the title the heads at the Plaza are not placed in a circle, as they were when they were displayed at the São Paulo Biennale last year. Sited on two tiers of the fountain and all facing the north, they suggest more a kind of reviewing stand. Taken at face value they are universally familiar animal heads, like the characters in Aesop’s fables. They are also slightly generic. They could have been made by any number of artists of different nationalities over the past several decades. Yet a few of them — notably the rooster, dragon and tiger — are distinctively ferocious looking and bristle with ornate detail and texture. Others are more docile and plain; the horse could almost be an oversize My Little Pony toy.

“Zodiac Heads” is a Conceptual work bodied forth as bronze sculpture that my colleague Holland Cotter rightly predicted would look “winsome” if you didn’t know the back story, but that becomes more subversive if you do. The heads are enlarged versions of those that were designed in the 18th century by European Jesuits for the Manchu emperor Qianlong as part of a famous fountain clock in the European-style gardens of the Summer Palace, or Yuanmingyuan, near Beijing. (Each of the originals spouted water for two hours a day, which may explain why the mouths of Mr. Ai’s copies are open, as if they are noisily expressing themselves.)

Knowing all this gives Mr. Ai’s piece a certain frisson, beginning with its mongrel origins (Manchurian, Chinese and European) and extending to his enlargement of the original work’s scale and reimagining of the missing heads. It is a seemingly benign work plundered by the West, now being shown to the West, triumphantly enlarged and reconstituted. But in interviews conducted before his incarceration Mr. Ai neatly sidestepped the importance of this knowledge, saying that it was not crucial for the public’s enjoyment of the work.

“They should just look at the objects and see the connection through their own experience,” he said.

The heads are also evidence that Mr. Ai’s achievement as an artist, activist, designer, writer and increasingly famous and fretted-about dissident forms a whole that may be greater than the sum of its parts.

At the ceremony Mr. Ai had the final word, and the last quotation, read by Alexandra Munroe, senior curator of Asian art at the Guggenheim Museum, was especially apt: “Without freedom of speech there is no modern world, just a barbaric one.”